Facts & Arguments: Why I can’t send my essays to The Globe and Mail, and why you shouldn’t either 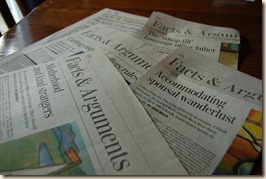 I have had five of my essays published on the Facts & Arguments page, and each time, it was a thrill and an honour to see my name in print and know that people across Canada were reading my words, learning something about me.  One of those essays, “The Roots of Her Story”, won a national writing award from the Professional Writers Association of Canada.  And I was paid $100 for each of those pieces, a fairly low fee for 800 words, but a satisfactory arrangement, considering that I could say that my work had appeared in The Globe and Mail.

When The Globe pays a writer for publication, they also pay for the right to sell that piece of writing from their electronic database.  My essays have appeared in all sorts of odd places, some of them, I suspect, not paid for.  But I didn’t fret too much about that because I had, after all, been paid for my work.

At a writers’ conference a number of years ago, Moira Dann, at that time the editor of the F & A page, suggested to a room full of writers that The Globe didn’t need to pay its essay contributors, that being published in a national newspaper was payment enough.  Apparently her bosses feel the same way.

But the problem is, The Globe and Mail benefits from these essays.  It can boast – or celebrate, as it did last week – about the appeals of the Facts & Arguments page.  It can sell these pieces from its electronic database.  All without paying the writer who supplied the essay.

I sent a Letter to the Editor, but I didn’t really think it would be published – and I was right.  I wrote:

The art of writing a personal essay is more difficult than readers may think. A great deal of thought, skill and awareness is required in order to create a compelling essay that transforms a self-indulgent story about, for instance, the death of a relative (or pet, or marriage) into a poignant and meaningful piece of writing. I’ve been proud to see five of my essays published on the Facts & Arguments page – but I stopped submitting my work when The Globe and Mail stopped paying F & A writers for the privilege of using their words.  The Facts & Arguments essay was intended by its creator, William Thorsell, to be the “centerpiece of personal writing quite unlike anything else in the newspaper.”  If the writing deserves to be published, the writer deserves to be paid.

Sadly – and I mean that word in its truest sense, I am sad - I won’t be submitting any more essays to Facts & Arguments until The Globe and Mail pays for the privilege of using my words. I will continue to send Letters to the Editor, and lobby my fellow writers, and email the Publisher of The Globe and Mail.  I don’t really expect anything to change.  Why would it, when so many eager essayists submit their work to the F & A editors every week?  The Globe wins, and I lose.

But I think what they are doing is wrong.

Sunday, June 6 was a big day in Elora.  For one thing, it was the day of the Elora Writers’ Festival, a wonderful afternoon of readings from six Canadian authors writing in a variety of styles and voices: Giller Prize winner Linden MacIntyre, Bonnie Burnard, Ray Robertson, poet Barry Dempster, Pasha Malla (“It’s a writer’s festival; will there be rides?”), and Terry Fallis reading from his hilarious political satire. All wonderful. 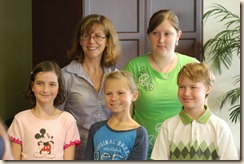 But the highlight for me happened a few hours before the Festival, when I had the pleasure of announcing the winners of the Young Writers Contest to a room full of young writers and their parents.  Who knew so many kids would turn up for this specially-organized celebration of young writers?  And who knew so many of the winners would be there to receive their prizes?

Judges Heather Wright and Kira Vermond spoke to the audience

about the challenges of choosing one piece of writing over another.  I encouraged the kids to think of themselves as writers and be proud of their efforts, win or lose.

No, kids.  Thank YOU!  Canada’s literary future is in excellent hands – yours!