I saw a poster years ago: an image of space, the huge expanse of the Milky Way, with an arrow and the tiny words, YOU ARE HERE. 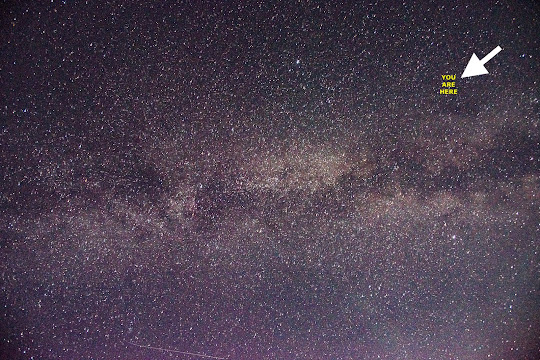 It stayed with me because I have always felt awe, respect and a fair amount of fear when thinking about my place in the universe. Thinking about where I fit into the great unknown (or frontier, if you’re a Star Trek fan) makes me uncomfortable.

Am I making a difference? Do I count?

There are so many unknowns in our pandemic universe right now, and it’s making me feel even more lost and anxious – you know, masks, distancing, isolation, impending Second Wave, the end of March Break, when will I feel brave enough to get my pandemic hair trimmed. Yeah, all that.

You are here. That’s our universe right now.

It turns out, I’m still here. Still cuddling my new grandson, and hugging my kids – once they finally made it out of Ontario to spend a cozy 14-day quarantine with us at our summer home in Nova Scotia.

Still playing my dulcimer on the deck at sunset. Still reading books. Watching the Jays. Lamenting the end of my beloved Maple Leafs’ season.

Still watching the herons gather on the sandbars at dusk, and a shy eagle grace us with an occasional fly-over. A mother deer and three fawns on the front yard. Still here.

Still writing, even though the big universe isn’t noticing my words or stories right now. Even though my book fell into the pandemic abyss. That’s okay. I know it’s still here, on a shelf in a bookshop, in a library (and in my heart, because every published book feels a bit like a beloved child, doesn't it?).

I'm fortunate, and I know it.

Earlier this summer the NEOWISE comet appeared and I watched with awe as it hung in the night sky over the Northumberland Strait. It reminded me of that poster from years ago. It reminded me that the universe is big and I am small.

But I’m still here. I hope you are too. 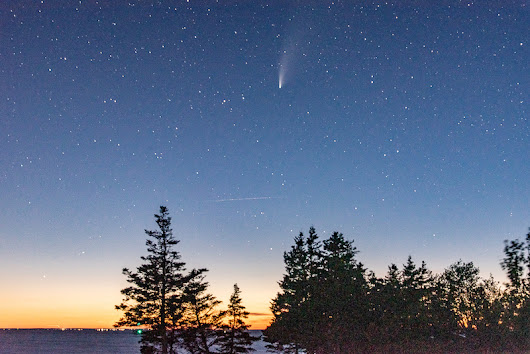 Posted by Jean Mills at 1:55 PM No comments:

A Writer's Life look back: Why is YA fiction so dark? 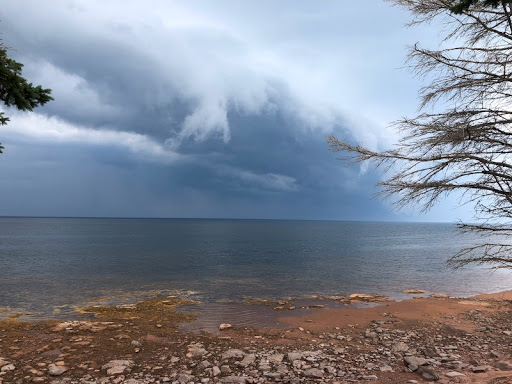 I posted this piece seven years ago, five years before my YA novel Skating Over Thin Ice was published. I was working on that novel then - the story of a young musical prodigy looking for direction when her career path starts to falter. It's a quiet story, a gentle story of searching for happiness. No violence (okay, one hockey fight). No sex (yes, some hugging and hand-holding). No aliens (well, there are these three girls nicknamed The Sirens...)

The novel wasn't written as a response to the viewpoint expressed in this 2013 blog post - I was already writing it at the time - but it did worry me that THIS was the publishing landscape I was headed for. Rejection seemed inevitable. Who'd want to read a gentle story about a girl who figures things out, slowly, aided by a kind best friend (Fredrik, the gay son of the Swedish ambassador), a unexpected ally (Nathan, a famous junior hockey star) and her grandfather (a world-famous violinist, and her musical partner in Trio St. Pierre)?
Nope. No violence, no sex, no aliens. What chance did such a story have?
(Skating Over Thin Ice did get its chance. Thank you, Red Deer Press, Ontario Library Association Forest of Reading and USBBY Outstanding International Books List).
As a YA novelist, I'm always interested to see what's being published and reviewed and sold.
I'm not sure much has changed since 2013.
********
Posted July 29, 2013:
The world is a troubled place right now, and YA fiction appears to be enjoying the darkness. No, not just enjoying it - relishing it. Gorging on it. Drowning in it. (I could go on...)

But - is all this dark, violent, dystopic exploration of unhappiness really what the kids are reading? Or is it just what YA writers and publishers think the kids want?  (I don't know the answer - I'm just asking the question...)

I guess I should be happy that the Era of Vampires appears to be waning. Okay, I read the Twilight series to stay current, and although it didn't thrill me the way it did my teenage daughter, I could see the appeal.  Ditto the Hunger Games and its sequels. Engaging fantasy, strong female character, a bit of romance. Before those two entries, kids worked their way through the increasingly dark Harry Potter. And of course there has been a fair share of lightweight Young Chick Lit as well. Trends come and go - we all know that.

But this past weekend I read about the following four YA books, each reviewed briefly on the Books page of the Globe. Here are snippets of the reviews by Globe reviewer Lauren Bride:

Letting Ana Go by Anonymous: "Following a nameless high-school student for over a year from lighthearted athlete through anorectic compulsion...the diary-entry format could potentially read as a how-to guide for the impressionable without quite giving an antidote or example of how to recover."

When We Were Good by Suzanne Sutherland: "...pitched into double grief...struggling to find her place at punk shows with tough, impressive kids...also finds trouble..."

Rush (Book One of The Game) by Eve Silver: "...electric high-action scenes, a world in peril (this time, by the threat of aliens), and amorphous morality in a broken society..."

Confession: I haven't read any of these books; just the reviews. A little research shows that critics (at least the critics who have blurbed for the books) love them. For instance,  "A radiant hybrid of piercing realism, creeping horror, and heartbreaking fantasy - but fantasy with dirt in its hair and scabs on its knees," says author Daniel Kraus (his own book is called Rotters) about Mermaid in Chelsea Creek.

So am I the only writer (and reader) who thinks the current crop of YA characters and their stories sound (as my teenage son calls it) "messed up"?

Is this really what kids are reading - or is it just what publishers are publishing?

The teenagers I know are intelligent, curious, confused, funny and often under tremendous pressure to perform at school, at home and at all the other activities that fill their lives. Are they really reaching for the darkside? Are they really connecting with and finding pleasure and meaning in reading a book featuring a "slightly frightening Polish mermaid"? Is there anything else out there to choose from? Maybe even something with humour, lightness, hope?

Of course, I may be wrong.

Why is YA fiction so dark? I'm open to enlightenment. 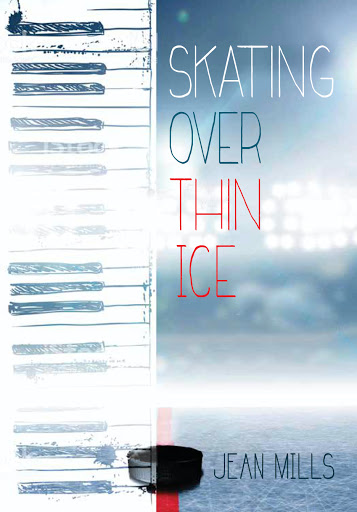 Posted by Jean Mills at 9:30 AM No comments:

“Fresh paint” and Testament of Youth 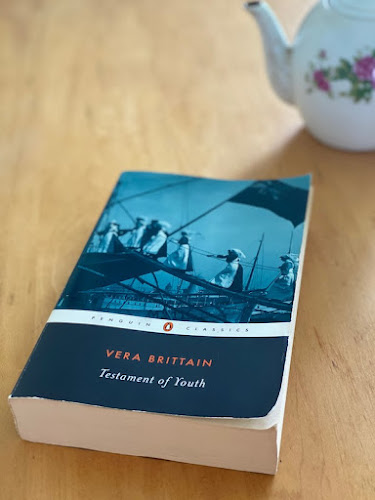 Is this ever going to end? This pandemic life? The news goes from bad, to bad, to a bit better, to bad again.

Honestly, it feels as if we’re living through a war.

I’m reminded of a scene in the movie adaptation of a favourite book of mine, set just after the Second World War – The Guernsey Literary and Potato Peel Pie Society.

“Fresh paint!” exclaims Juliet, looking out the window of a London bus in 1946. “One might almost believe the war is really over.”

This wartime-like existence is taking a toll, and one of the casualties is my ability to engage with new books. It’s all about re-reading old favourites right now. Comfort reading, you might call it.

A recent selection from my bookshelf was Testament of Youth, Vera Brittain’s memoir of her experiences before, during and after the First World War.

I first read this book in my twenties – my youth, you might say – and I imagined Vera Brittain’s life experiences super-imposed on mine: the rigid social expectations that young women faced, the strong resistance to her pursuing an academic career, the looming conflict and destruction of all her hopes and dreams as The Great War consumed her life and the people she loved. Her years supporting the war effort at home and in France as a nurse.

And there I was, an educated young woman with freedom, always supported and encouraged by my family to pursue my dreams, part of a social group with no danger that any of us would be expected to donate our lives to the trenches.

I haven’t read this book for decades, but I brought it with me to the shore this summer and it was exactly what I needed in this time (for me) of high anxiety, isolation and a constant underlying fear about the future.

I want to be hopeful. I want to believe that together we, guided by our leaders and scientists, will win this battle against COVID-19.

Re-reading Testament of Youth helped. For young Vera Brittan, there is so much loss, so much tragedy, so much despair. She loses practically everything and everyone she loves – and yet, she still comes through it, looking ahead.

In the Preface, Brittain’s daughter, Shirley Williams - herself a change-making Liberal Democrat MP in the UK - says that her mother was so shaped by her war experiences that “it was hard for her to laugh unconstrainedly; at the back of her mind, the row upon row of wooden crosses were planted too deeply.”

And yet Vera Brittan went on to campaign vigorously for pacifism, the League of Nations, nuclear disarmament, cooperation among enemies.

“I still remember her in her seventies,” writes Williams, “determinedly sitting in a Campaign for Nuclear Disarmament demonstration and being gently removed by the police.”

We’re living through historically tough times right now. I wonder what the lasting effects will be on us, our kids, our idea of “normal.” But re-reading this brilliant memoir from someone who endured and survived her own historic tough time has helped.

And yes, we may have to wait a while, but I believe there will once again be fresh paint.

Posted by Jean Mills at 8:30 AM No comments: